The sepia tones awash in the setting sunlight.  He steps back and says, “Daddy, watch.”  There’s not a moment I don’t watch.  Take in like a breath, knowing the air and these moments will disappear in a matter of seconds, or so it seems.  If we get 18 years with our children, one-third of my time with him has gone.  Six years...how?

The news of him came just past daybreak and just before Thanksgiving in ’06.  We were new at this, she and I.  The smoke of childhood still smoldering, still slightly aflame.  In our second home, making it our own. Painting walls. Hanging frames. Smiling.  Dreaming.  Knowing there was more and, soon, it would come.  I still feel that: the unknown.

His middle-namesake, my father, still sits in those moments.  In that 30-year old mind of mine, he would be there always.  Or at least another 20 years.  He lasted 20 more months.  Cancer filled his brain and our lives, shattered them beyond recognition.  Just 11 months after my own son’s birth, he passed on.

I swore I wouldn’t be him — my father. His tendencies were the ache of Achilles to me. They wore me to the core.

The cancer wore him, revealing the best and sometimes the worst, though not in his own volition.  It ravaged his mind and stole his dignity.  But he remained and still remains.

But, I’ll be damned.

That evolution seems impossible, stopping a river of time and genetics barehanded.  He appears in swatches.  His figure shrunken in my son’s outline. An odd feeling, seeing your father in yourself and your son at once.  One smile echoes another.  The same big-eared grin, 50 years and two generations apart.

And there he sits as if on my shoulder.  The inflection of voice, the tone of empty threats, the days on the sidelines, watching, coaching and hoping.  I find myself wandering at times, wishing for the invaluable but inaudible.

Given the One More Chance, I’m not certain I could speak.  Only mimic my son: “Daddy, Watch” as I point to the blond haired boy hitting the baseball and reading a book or his little sister dancing and singing.

My son will begin his second year in school in just over a month.  He’ll grow out of his hiking boots and baseball pants.  He’ll need a new shirt and make new friends. He’ll have his first innocent kiss.  Smiling, unaware of what just happened.  He'll grow and learn and move out.  Write his own story.

Time won’t stop.  It is cruel.  It is vastly unsentimental. It steals and dismantles.

Peering through the Rearview

The rearview mirror filled with his smile and a quick wink. And like that I realize he's growing. In a few days, my son will start kindergarten. A few blinks later, we'll be taking him to college.  Leaps and bounds in measurements of gold stars and honor rolls. We'll circle the basepaths in baseball and life and soon, days like today, in all their perfect wonder, won't register.

Today, in a summer filled with unforgettable nights and days, is tied for first. It's rare for a 35 year old step from his office shell and dare a five year old to take him back in time, too consumed daily with the next task to take a step away and grab a handful of smiles.  But as the rearview reflected his smile, it brought me solace.

There will be bad weeks at work. There will always be unanswered questions and an onset of disappointment. They disappear with a return to innocence. I've missed nights at home for work, nights where the unimportance resounds through me like a bell's toll.  Too many to count and there's no real escape from it. Maybe someday he'll understand the only place I truly want to be is right now where the shine of his smile as the sunset glows on him fills my soul entirely. Maybe, when I'm gone from home, he'll remember today and days like it with that warm grin.

He charted our adventure. We climbed. We crawled. We laughed. And he smiled. I'll never forget that brilliance. How he saw his own sense of adventure hatch like an eaglet. His fears disappeared like smoke and grabbed mine in its departure.

He made me a child again, if only for a few moments, erasing my fears and worries and showing me the path I need to see.

He starts kindergarten soon. Yet he's the teacher.

I don't know where I'd begin if the chance arose.  Perhaps an introduction to my son, whom he met, but brain cancer kept him from knowing.  Then my beautiful little girl who makes me cry with a smile.  He'd smile at her, it's impossible not to, mop of blonde curls surrounding her chubby cheeks, surrounding that smile, and a quick glimpse of heaven.  He'd love them, truly.

Part of me knows he's smiling on us, watching them grow and laying a caring hand on their shoulders, but most of me still curses the heartbreak and the broken dreams and open-ended life created by his death.

It's been four years and all I have are questions.  How are you?  Am I doing okay as a man, as a husband and most importantly, as a father?  What's it like wherever you are?....Will you stay? Just a minute longer?

No answers and never will be. Instead, the hope a life I've chosen isn't one reflected upon in regret and one which mixes the heartbreak of missed moments with the fulfillment of a life's work, whatever indistinguishable accomplishment that might be or become. Of hope my children know I love them unconditionally, the way I knew with him.  Of hope they know they're perfect in whatever they may become if their best is the fruit of labor, love, faith and determination.  Of hope they embrace the undying support I knew and attempt to pass on.

Friends tell me they've had the dream.  One where they return, spend moments beside one another, laughing, crying and talking.  That dream always ends in heartbreak.  I'm not certain I want that.  His absence now is almost too much at times.  An aberration or the teasing of a fulfilled wish could break me in two.

Seems like yesterday. An open wound to remain as such.
Posted by William at 9:22 PM No comments:

Our reflections aren't seen only in a mirror.

Posted by William at 9:13 PM No comments: 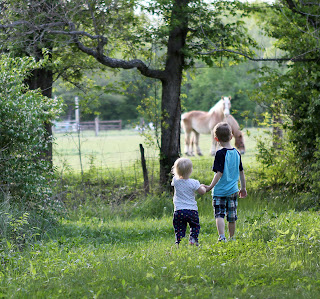 "Keep quiet," I thought as I crawl quietly through the cemetery. 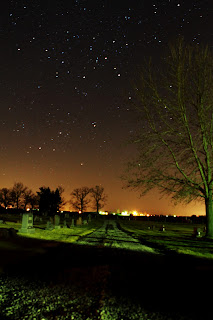 The stars were breathtaking, but the cold bit my fingertips like a trapped doberman.

Still, it was worth the trip.  I hadn't imagined the night alone would bring me to this, but I dipped further into myself.

No music, no talk radio, nothing but my thoughts to myself as I stared into the netherworld.  The night reminds me I once envisioned the dream my son holds in his sleep.  Nothing gains his interest like a night under the stars, peering through the telescope, finding Jupiter or Venus.

But school changed my ideas of space travel.  You see, to me, math and science were Latin.  My grades and desire reflected it.  My blank stares at the overhead projection were interrupted only by the punctuating rapt of my teacher's voice calling my name.

My eyes are open to the folly of my youth now.  Time doesn't change the mistakes of the past tense dreamer.

Like most parents, I turn to learn what churns my child's wheelhouse.  My love lies in writing, in photography.  But daily, I gain crumbs of science, math and the brilliance of mechanical minds whose bolts I couldn't replace.  Fascination with science plagues me now.  Consumes, really.  We're all carbon, formed in our own mould, yet their wiring sparks a little brighter.

I live for the day, when sharing what I've learned with my son gains his excitement, hoping he's one of them.  Believing it can be fostered from kindling.  Maybe his life will uncover the unknown.  Maybe his legacy will be a cure, an antidote or a discovery.

But then again, maybe the love of the unlearned will fade. Mine did.  Changed to athletics, then girls.  There it stayed, until he came.  For him, now the twinkle, like the stars tonight, is still there.  Unblemished like his sense of the world. 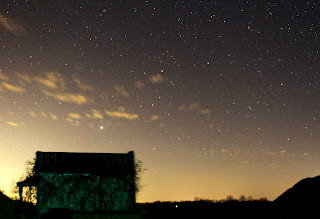 The day passes before I can look to see the sunlight. It's been that way lately. The lone illumination of the day sneaking through the blinds or from the LCD computer monitor.

Where I sit is a dead end, really.

Even the greatest of highways have a dead end, or at least a cul de sac.  From one, you can't turn back, the other you face the road you've taken.

I'm not sure which option is the better choice.